Conjuring 18th-Century Affekt with Alberti Bass on the Modern Piano

This post was first published by Oxford University Press:  http://blog.oup.com/2016/05/affekt-modern-piano-alberti-bass/

Affekt (the ability of music to stir emotions) is the foundational pillar for eighteenth century style. It was achieved through attention to detail and proper execution. And done in good taste, which implies a deep understanding of proper practices of the time. Nearly every notational and performance decision was based on affekt—everything from formal structure to note values, dynamics to articulation, and accompaniment patterns such as Alberti bass.

Expressing affekt begins with clearly understanding and conveying the structural or formal foundation and harmonic function. It is upon this that all other elements are laid. Just like the beauty of the Washington National Cathedral is built on solid footings, pilings, and framework, eighteenth-century music finds itself grounded on thoroughbass. C. P. E. Bach devotes a full twenty-five percent of his Versuch to this fundamental component. But, it’s not just the harmony, it’s how the harmonic structure drives expression. And with this knowledge interpretive and expressive answers are laid at our feet. Consequently, how to execute expressive embellishing components such as Alberti bass are then more easily determined to bring richness and clarity to our playing.

The Harvard Dictionary of Music points out that broken-chord patterns date back to the seventeenth century,[1] of which Alberti bass is the most commonly known. It is “an accompaniment figure, found frequently in the left hand of the 18th-century keyboard (sic), in which the pitches of three-pitch chords are playing successively in the order lowest, highest, middle, highest, as in … Mozart (Sonata in C major K. 545).”[2] The figure is named after Italian singer, harpsichordist, and composer Domenico Alberti (1710-1740?), who used this figuration extensively.[3] Today, Alberti bass has taken a more generic definition, referring to various configurations of arpeggiated broken harmonies.

Once it appeared on the scene, the Alberti bass took hold. It was very popular around 1800 and went out of fashion quickly as new pianos appeared that contained a more resonant soundboard that resulted in a naturally louder, longer-lasting tone. The perfect genre for Alberti bass configurations was the sonata; the perfect instrument to execute them on was the fortepiano. It is extremely conducive to the mechanics of the fortepiano (with a bright, clear attack), lending energy to the declamatory nature of the instrument and rhetorical style of the time. What is often described as simply an accompaniment pattern today is much more important in creating affekt in eighteenth-century style. The Alberti bass motives create rhyth­mic and harmonic energy, drive, and momentum—pulse and forward propulsion—whether dramatic or lyrical. When it appears momentum intensifies. A clever quip Malcolm Bilson provided says it all: “When it shows, it goes!”[4]

The Alberti bass shapes vary according to need and levels of intensity. As the intensity of the affekt relaxes, so does the activity of the figuration. 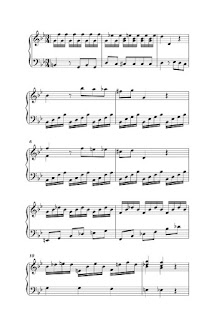 The change in sound aesthetic from one figuration to another is quite dramatic.

There are some concepts that apply regardless of the instrument on which Alberti bass is executed: Heed notational clues to understand formal structure from the very beginning rings true for any repertoire at any level from any era; and let the figuration drive expression and momentum.

The trick lies in conjuring up this sound aesthetic on an instrument for which the figuration was not intended, the modern piano. So what does one do “when it shows?” Many modern players attempt to repress, subdue, or minimize Alberti bass. To do so is much like trying to ignore that pesky gnat at a picnic. It is simply annoying. More importantly, it fails to serve the purpose for which it was intended.

It is most effective to highlight the affekt, found in its rhythmic drive, secondary melodies, or dramatic or beautiful quali­ties. This effort will bring energy and focus to the motive, as was historically intended and can be reconciled on the modern piano to an effective end:

There are simple technical principles that can be applied to facilitate execution:

Formal structure and harmonic function provide the solid groundwork and long-lasting beauty on which eighteenth-century affekt is built. Alberti bass is one of the tools available to enhance and ornament the founda­tion. Taking great care in shaping and highlighting the various figurations provides the necessary means to conjure up eighteenth-century affekt—even on the modern piano!