The Eighteenth-Century Rhythm Riddle: What is the Quarter Note Quandary?

This blog was first published by Oxford University Press:  http://blog.oup.com/2016/10/quarter-note-eighteenth-century-rhythm/


If you were to ask a modern musician what the quarter note means in Common Time the answer would be simple: “It lasts for one full beat, to be released at the beginning of the succeeding beat.” Ah, but eighteenth-century rhythm reading is not a simple “one-size-fits-all” affair. Just as spoken language has evolved over time, so has music notational language.  The notation has remained much the same; it is how the notation is read that has changed.  So, how is the quarter note quandary solved?  Gazing at the issue through an eighteenth-century lens will answer the riddle.

Eighteenth-century style is one of clarity – expressive rhythmic clarity – that projects character or affekt through the notation at hand.  And the crisp, articulate fortepiano is the perfectly suited instrument for executing the style. All rhythmic elements are chosen to reflect affekt; so much so that when certain elements are present a particular affekt is understood. The Rhythm Schemata diagram provides insight to the interacting elements: 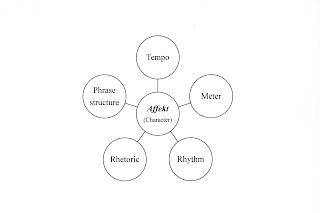 Notice that affekt is at the center of the wheel.  All notational decisions – appropriate tempo and meter, carefully crafted formal and phrase structure to allow for execution of rhetoric, and specific rhythm choices – are made to express the desired affekt.

Execution of the quarter note varies greatly depending on tempo and meter choices, which are directly related to period dances. For example, a march in duple meter commands a different affekt than a minuet in triple meter. Just like there are heavy and light meters, note values act in much the same way.  A time signature with a 2 in the bottom denotes heavy affekt, one with a 4 lighter, and one with an 8 in the bottom lighter yet.  Note value choices within the meter provide execution clues.  For instance, a piece made up primarily of half and quarter notes would be heavier than one of eighth and sixteenth notes.  A comparison of Beethoven’s Piano Sonata, op. 10, no. 3 to his Piano Sonata op. 14, no. 2 demonstrates how note values take on differing character based on these period practices. So, the quarter note may take on a variety of characters, and consequently lengths, based on affekt.

Today, legato is the ordinary way of playing.  If a line is presented with no markings (staccato or legato), the performer assumes to play legato, holding every rhythm for the full value. Not so in eighteenth-century style.  This is where the answer to the riddle lies: The quarter note is held for its full value only when it occurs under a slur or a tenuto marking. How long should it be held?  Just when is it appropriate to release the quarter note?  This is where affekt is essential (and why it is at the center of the wheel). Depending on affekt, a quarter note may be cut quite short (like a crisp timpani attack) or held for most of the beat (as in a forlorn oboe solo). One must turn to the nuances of notation –  formal structure, meter, expression marks, dynamics, and beaming – for clues.

Hear the improvement in the sound aesthetic as you move through the following audio examples: 1) a frequently-heard modern rendition, 2) an interpretation on a Belt-Walter replica ca. 1780’s five-octave fortepiano, and 3) a reconciled and historically informed rendition on a modern piano. The energy and vibrancy provided by using period rhythm-reading strategies is markedly noticeable.

Taking the time to view the score through an eighteenth-century lens and apply the period performance practices judiciously to modern playing provides the opportunity to discover an old language that may be recreated in a new way.